What are the benefits and harms of thyroid hormones for adults with subclinical hypothyroidism (SCH)?
This guideline was triggered by a recent systematic review of randomised controlled trials, which could alter practice.

Current guidelines tend to recommend thyroid hormones for adults with thyroid stimulating hormone (TSH) levels >10 mIU/L and for people with lower TSH values who are young, symptomatic, or have specific indications for prescribing.

The guideline panel issues a strong recommendation against thyroid hormones in adults with SCH (elevated TSH levels and normal free T4 (thyroxine) levels). It does not apply to women who are trying to become pregnant or patients with TSH >20 mIU/L. It may not apply to patients with severe symptoms or young adults (such as those ≤30 years old).

How this guideline was created

A guideline panel including patients, clinicians, and methodologists produced this recommendation in adherence with standards for trustworthy guidelines using the GRADE approach.

The systematic review included 21 trials with 2192 participants. For adults with SCH, thyroid hormones consistently demonstrate no clinically relevant benefits for quality of life or thyroid related symptoms, including depressive symptoms, fatigue, and body mass index (moderate to high quality evidence). Thyroid hormones may have little or no effect on cardiovascular events or mortality (low quality evidence), but harms were measured in only one trial with few events at two years’ follow-up.

The panel concluded that almost all adults with SCH would not benefit from treatment with thyroid hormones. Other factors in the strong recommendation include the burden of lifelong management and uncertainty on potential harms. Instead, clinicians should monitor the progression or resolution of the thyroid dysfunction in these adults. Recommendations are made actionable for clinicians and their patients through visual overviews. These provide the relative and absolute benefits and harms of thyroid hormones in multilayered evidence summaries and decision aids available in MAGIC (https://app.magicapp.org/) to support shared decisions and adaptation of this guideline.

What you need to know

* Thyroid hormones should not be routinely offered to adults with SCH (strong recommendation according to GRADE).

* Thyroid hormones do not lead to important benefits for adults with SCH for quality of life or thyroid related symptoms including depressive symptoms and fatigue.

* Taking a pill and attending periodic testing on an ongoing or lifelong basis is burdensome.

* This recommendation builds on a recent systematic review and meta-analysis, which included the results of a new randomised controlled trial
If implemented, this recommendation may substantially alter prescribing trends, which show that thyroid hormones are increasingly prescribed, most probably due to SCH.

How was this recommendation created?

Our international panel included methodologists, general practitioners, internists, endocrinologists, and patient partners with subclinical hypothyroidism (SCH) (see appendix 1 on bmj.com for details of panel members). They decided on the scope of the recommendation and identified patient-important outcomes to inform the recommendations.

The panel met online to discuss the evidence and formulate a recommendation. No member had a financial conflict of interest; intellectual and professional conflicts were minimised and are transparently described (appendix 2 on bmj.com). The panel followed the BMJ Rapid Recommendations procedures for creating a trustworthy recommendation, including using the GRADE approach to critically appraise the evidence and create recommendations (appendix 3 on bmj.com).28 The panel considered the benefits, harms, and burdens and other practical issues related to thyroid hormones in the context of SCH, as well as expected variations in patient values and preferences. Within the GRADE approach, recommendations can be either strong or weak (also known as conditional), and for or against a specific course of action.
.
. 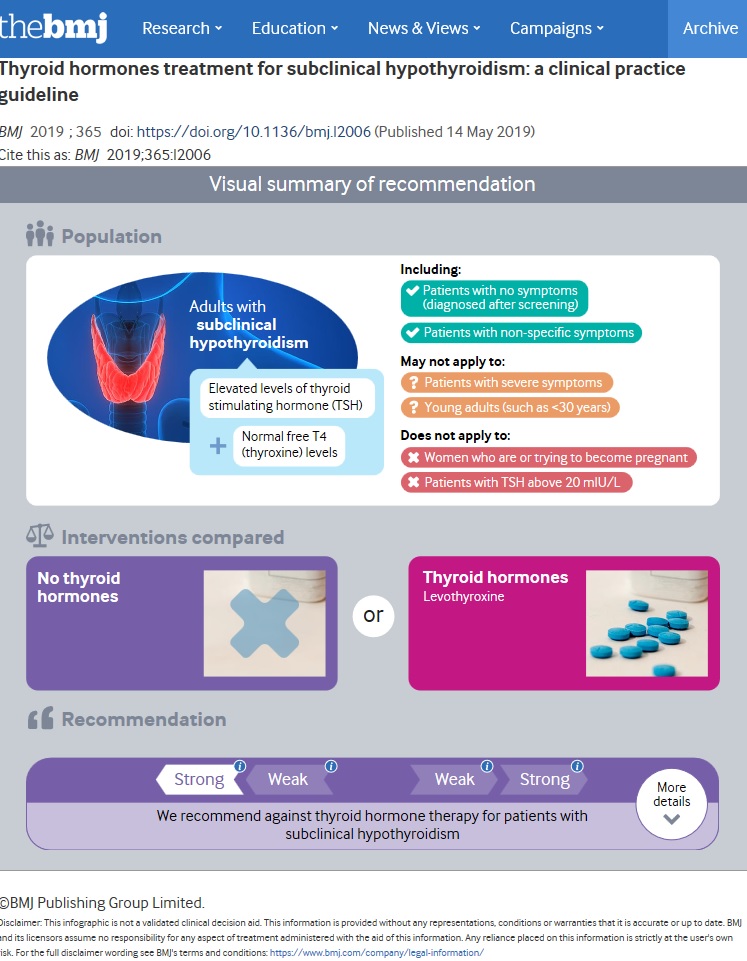 Some recent media reports have suggested that patients with hypothyroidism may receive no benefit from levothyroxine. Please read our short statement which seeks to clarify some of the facts which were presented.

Following recent headlines in the media suggesting that patients with hypothyroidism may receive no benefit from being treated with synthetic thyroxine (levothyroxine), the BTF wishes to reassure patients and clarify some of the facts relating to the original article that appeared in the BMJ.

1. The article's recommendation is that patients who have borderline hypothyroidism (also known as subclinical hypothyroidism), 'would not benefit from treatment with thyroid hormones'. These are patients whose blood tests confirm they have a TSH which is slightly raised but a FT4 level that is still within the normal reference range.

2. It is important to note that this recommendation is only for the group of patients with subclinical hypothyroidism and is NOT referring to the majority of patients who have been diagnosed with clinical or ‘overt’ hypothyroidism (which will have been confirmed with a high TSH and a low FT4 level).

3. The article also states that 'the guideline does not apply to women who are trying to become pregnant or patients with a TSH of greater than 20mlU/L.' Furthermore it may not apply to patients with severe symptoms or young adults, such as those under 30 years old.

4. The advice of the experts is that patients with subclinical hypothyroidism who take levothyroxine do NOT stop taking their thyroxine medication but instead discuss it with their GP at their next routine medication review.

5. GPs will only prescribe thyroxine medication if they feel they are of genuine benefit. In patients with subclinical hypothyroidism, GPs will often trial treatment to assess the benefits rather than committing patients to lifelong treatment, which may be unnecessary.

In a recommendation that could "substantially alter prescribing trends," according to its authors, an international panel of experts concludes that patients with subclinical hypothyroidism should not be routinely offered thyroid hormone replacement therapy.
This is because overwhelming evidence shows no benefit in quality of life or symptoms, which are minimal in many patients and not present at all in one third of individuals, they outline.

The guideline panel concludes in its recommendation, published online this week in BMJ, that "for adults with subclinical hypothyroidism, thyroid hormones consistently demonstrate no clinically relevant benefits for quality of life or thyroid-related symptoms, including depressive symptoms, fatigue, and body mass index (BMI)."

The guidance — based on findings from a systematic review and meta-analysis of 21 trials with 2192 participants published in November (JAMA. 2018;320:1349-1359) — represents a "strong recommendation" against prescribing thyroid hormones (primarily levothyroxine LT4) in adults with subclinical hypothyroidism, defined as elevated thyroid stimulating hormone (TSH) levels when free T4 (thyroxine) levels are normal.

The new advice was published as part of the BMJ's rapid recommendations initiative, developed to provide "rapid and trustworthy guidance based on new evidence to help doctors make better decisions with their patients," according to a BMJ press statement.
Members of the guideline panel, led by chair Mieke Vermandere, MD, PhD, of the Academic Centre for General Practice of Public Health and Primary Care, KU Leuven, Belgium, includes clinicians and methodologists, as well as patients themselves, adhering to the standards for trustworthy guidelines using the GRADE approach.

Among key findings in the systematic review that prompted the recommendation are those from the TRUST trial, as reported last year by Medscape Medical News — the largest study in the meta-analysis which focused on older patients.

In that trial of 737 adults aged 65 years and older (mean age, 74 years) with a wide variety of comorbidities, therapy with levothyroxine (LT4) showed "no apparent benefits in older persons with subclinical hypothyroidism."
The panel says the TRUST trial offers highly convincing evidence.
"There was high certainty that there is little to no difference in general quality of life, thyroid-related symptoms, depressive symptoms, fatigue, cognitive function, mus­cle strength, and BMI," the panel writes.
"The results are consistent across these outcomes, which strengthens our confidence that there really is a lack of benefit."

They note also, however, that the evidence against treating subclinical hypothyroidism extends beyond older patients, applying to a broad range of adults with the condition.

More Than Half Have Normalization of TSH Levels Without Treatment

When symptoms are present, they can include fatigue, muscle cramps, sensitivity to cold, sluggish thinking, and depression; however, the panel notes that 20% to 25% of people with normal thyroid levels report one or two of these symptoms.

And in the majority of cases, the issue resolves itself. About 62% of people with TSH levels of 4-10 mlU/L experience normalization of thyroid levels within 5 years without any treatment, the report notes. The risk of overt hypothyroidism emerging from the subclinical forms of the condition ranges between 2% and 5% per year.

And although observational data have suggested a link between subclinical hypothyroidism and an increased risk of coronary heart disease, the associations have not been seen with TSH levels of 5-10 mIU/L.

Prescriptions Have Soared Beyond Prevalence

Under current guidelines, thyroid hormones are recommended when TSH levels are above 10 mlU/L, and for patients with lower TSH values who are symptomatic, young, or have other indications for treatment.

Yet prescriptions of thyroid hormone replacement therapy for subclinical hypothyroidism have sharply risen. In 2015, levothyroxine was among the most prescribed drugs in the United States.

One study in the systematic review showed a doubling of prescriptions in the UK in 1996-2006, and increases were reported in a Norwegian population as well — despite no corresponding increases in the incidence of subclinical hypothyroidism.

And another study (JAMA Intern Med. 2014;174:32-39) also included in the review showed as many as a third of patients were offered levothyroxine after just a single TSH test, despite the evidence that TSH levels fluctuate and often return to normal on their own.

The panel notes that "with such an approach it is difficult to separate real from placebo effects," and the JAMA study also showed that once patients start levothyroxine therapy, most remain on the drug for several years.


Avoid Burden of Lifelong Therapy, Monitor, but Make Exceptions
Although there is uncertainty about the potential harms of the possibly unnecessary use of levothyroxine, the burden of lifelong management itself should also be factored into the equation, the panel notes.

Instead of prescribing treatment with thyroid hormone, "clinicians should monitor the progression or resolution of the thyroid dysfunction in these adults," they advise.

There are exceptions. The recommendation specifically does not apply to women trying to become pregnant and those with TSH levels above 20 mlU/L, and it "may not" apply to patients with severe symptoms or young adults aged 30 years and younger, the panel notes.

"For younger people (under 30 years of age) and for patients with unusually high TSH levels (> 20 mIU/L with normal T4 levels) the evidence remains more indirect, although this concerns only a small minority of patients," they write.

The BMJ rapid recommendation is a collaborative effort with the MAGIC group, and a full version of the recommendation, including decision aids, can be accessed using the MAGICapp.

The panel members have reported no relevant financial relationships.