BACKGROUND
The use of levothyroxine to treat subclinical hypothyroidism is controversial. We aimed to determine whether levothyroxine provided clinical benefits in older persons with this condition.

METHODS
We conducted a double-blind, randomized, placebo-controlled, parallel-group trial involving 737 adults who were at least 65 years of age and who had persisting subclinical hypothyroidism (thyrotropin level, 4.60 to 19.99 mIU per liter; free thyroxine level within the reference range). A total of 368 patients were assigned to receive levothyroxine (at a starting dose of 50 μg daily, or 25 μg if the body weight was <50 kg or the patient had coronary heart disease), with dose adjustment according to the thyrotropin level; 369 patients were assigned to receive placebo with mock dose adjustment.

The two primary outcomes were the change in the Hypothyroid Symptoms score and Tiredness score on a thyroid-related quality-of-life questionnaire at 1 year (range of each scale is 0 to 100, with higher scores indicating more symptoms or tiredness, respectively; minimum clinically important difference, 9 points).

No beneficial effects of levothyroxine were seen on secondary-outcome measures. There was no significant excess of serious adverse events prespecified as being of special interest. 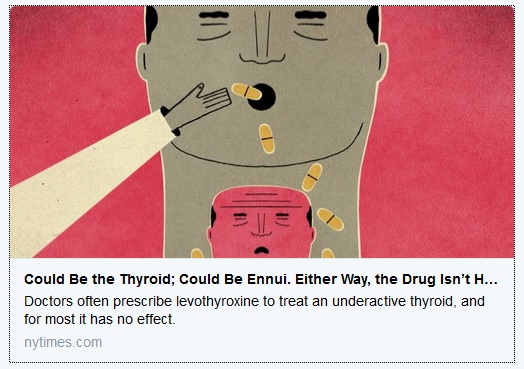 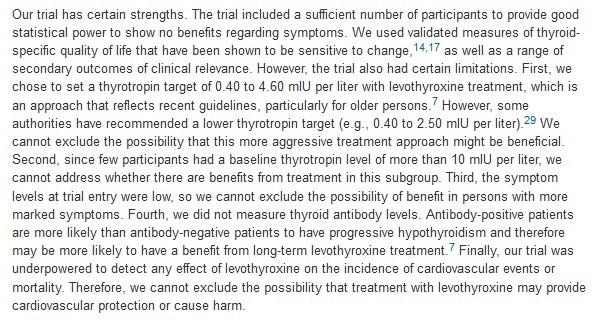 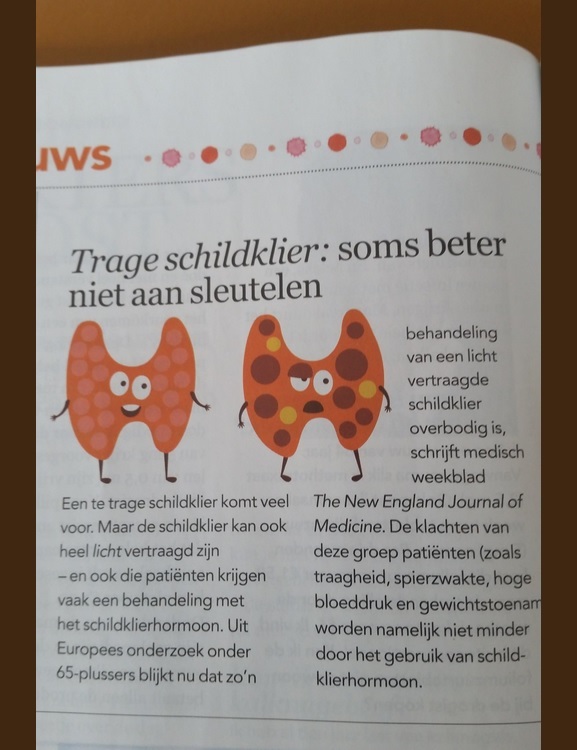 Data from the Thyroid Hormone Replacement for Subclinical Hypothyroidism (TRUST) study were presented April 3 here at ENDO 2017: The Endocrine Society Annual Meeting by David J Stott, MD, professor of geriatric medicine at University of Glasgow, Scotland, and were simultaneously published in the New England Journal of Medicine.

The study, of more than 700 adults aged 65 years and older with subclinical hypothyroidism — an elevated serum thyrotropin level but with serum free thyroxine level within the reference range — found that levothyroxine provided no apparent benefit in terms of symptoms, tiredness, and thyroid-related quality of life, or in any secondary outcomes, including cardiovascular events.

"Levothyroxine is the fourth most widely prescribed drug in the United States, and in Europe it's the third most widely prescribed drug. A lot of people are being treated on the basis of a slightly elevated [thyroid-stimulating hormone] TSH level. This study, I think, will reset the bar and make people more cautious about treating those individuals," Dr Stott told Medscape Medical News in an interview.

Asked to comment, session moderator Jacqueline Jonklaas, MD, PhD, associate professor, division of endocrinology, Georgetown University, Washington, DC, said, "Currently, the only hint of benefit for levothyroxine treatment is for people with subclinical hypothyroidism with TSH values above 10 [mIU/L], whereas in this study most individuals had TSH values below 10.

"I think that in terms of the primary outcomes, the tiredness and symptoms, Dr Stott has shown that we would do just as well following these people carefully rather than treating."

Dr Stott also cautioned that the study findings apply only to patients with subclinical hypothyroidism who have relatively few or no symptoms. "If you've got someone with a biochemistry consistent with subclinical hypothyroidism and their symptoms are much more dramatic, I think you still need to be thinking you might want a trial of treatment with levothyroxine in such a patient.

"But for people with few or no symptoms, I think our data are really quite convincing that these subjects should not be routinely treated."

The investigators had originally intended for cardiovascular outcomes to be a primary end point along with thyroid-specific quality of life, but they soon realized that "we were going to be grossly underpowered to address the cardiovascular outcome issue," Dr Stott explained, so they demoted it to a secondary outcome.

Dr Jonklaas commented, "I think Dr Stott is to be congratulated for conducting a very challenging and difficult study," adding that the change of cardiovascular outcome end points from primary to secondary "shows that it's going to be incredibly difficult to ever conduct that study we'd all like to have looking at [cardiovascular] outcomes. So, it's sort of discouraging from that standpoint that we still do not have such data."

No harms were seen with levothyroxine, but Dr Stott pointed out the financial cost of unnecessarily treating subclinical hypothyroidism.

"The cost is much more than the tablet, which is quite cheap, but you get into a cycle of blood tests and follow-ups. It medicalizes the situation and creates all sorts of burdens that we can avoid."

No Benefits With Levothyroxine

Half of the patients (368) were randomly assigned to levothyroxine (starting dose of 50 μg/day or 25 μg for those with body weight less than 50 kg or those with coronary heart disease), with dose adjustment according to the thyrotropin level. The other 369 patients received placebo tablets with mock dose adjustment. Over 90% of both groups completed the initial 12-month follow-up.

Thyrotropin levels were reduced from baseline (mean, 6.4 mIU/L) to a greater extent in the levothyroxine group than in the placebo group throughout the study, with an average difference of 2.29 mIU/L (P < .001).

The two primary outcomes were the change in the Hypothyroid Symptoms score and Tiredness score on a thyroid-related quality-of-life questionnaire at 1 year (range of each scale is 0 to 100, with higher scores indicating more symptoms or tiredness, respectively; minimum clinically important difference, 9 points).

A slight drop in fatigue was seen at a 24-month extension of the study (P = .05), but the numbers were smaller (194 on levothyroxine, 187 taking placebo) and the finding "is really of borderline significance and probably not clinically meaningful," Dr Stott said.

There was a small deterioration at 12 months in the EQ-5D score in the levothyroxine group (P = .05), but an improvement at 24 months (P = .03), again unlikely to be clinically important, according to Dr Stott.

"No effects were seen on secondary measures….All were pretty flat," he noted.

Rates of other adverse events of special interest, including new and overall heart failure, fractures, and new osteoporosis, all occurred in 3.5% or fewer patients, and there was "no hint of anything major coming up in adverse events," he concluded.

Don't Extend Results to Those Younger Than 65

In speaking with Medscape Medical News, Dr Stott cautioned that the study findings shouldn't be extrapolated to people younger than 65 years and indeed that thyroid dysfunction in younger adults tends to be more often autoimmune and symptomatic.

In contrast, declining thyroid function appears to be a common phenomenon in aging humans. And, in fact, he noted that some epidemiologic data suggest that people with slightly underactive thyroid live longer and don't seem to have more symptoms than their euthyroid counterparts. "So there could be an evolutionary benefit…but of course that's conjecture."

The study was funded by a research grant from the EuropeanUnion program and by grants from the Swiss National Science Foundation, the Swiss Heart Foundation, and Velux Stiftung. Merck provided the levothyroxine.