Thyroid Drug Potency is Being Tightened: FDA Changes Specs for Levothyroxine
Synthroid, Levoxyl, Levothroid, Unithroid, and the Generics Are All Affected


On October 3, 2007, the FDA issued a press release and an online Q&A, announcing tighter new potency specifications for levothyroxine sodium, the thyroid hormone replacement drug that is used to treat hypothyroidism and other thyroid problems. Levothyroxine sodium is the drug's generic name, but it is most often known by the popular brand names Synthroid, Levoxyl, Levothroid or Unithroid.

These new provisions, which go into effect in two years, are designed to ensure a narrower range of potency of levothyroxine throughout its entire shelf life.

Specifically, the FDA specifications say that levothyroxine sodium medications will need to maintain potency levels between 95 and 105 percent until their expiration date. This range is tighter than the current standard, which is a range of 90 to 110 percent potency.

The FDA has mandated these changes because they have found in recent surveys that levothyroxine potency is not stable.

The FDA evaluated stability data for levothyroxine from all manufacturers, for drugs produced between July 2003 and June 2005. What they found was that the drugs tended to lose potency over time, and some were degrading quite quickly, and losing so much effectiveness that they were close to the 90% minimum potency level by the time they were close to expiration.

Other findings of the FDA:
•Some levothyroxine packaging -- blister packs, for example -- degrade more quickly than others.
•Some levothyroxine tablets were stable and lost less than 5 percent of their potency over a 2 year period, while others lost as much as 10 percent of labeled potency in just 9 months.
According to the FDA's press release, Janet Woodcock, MD, of the FDA's Center for Drug Evaluation and Research, has said, "Tightening the potency specifications will ensure that the most vulnerable patients taking thyroid medication will receive the appropriate level of drug therapy needed for their condition."
The FDA says that their new specifications will ensure that levothyroxine products are more stable, have less fluctuation in potency, and will limit the amount they can degrade over the entire shelf life.


The ultimate goal is less variability in the products, which in turn, will help ensure more stable thyroid function for patients. This is, according to the FDA, especially important for thyroid cancer survivors, who require stable, suppressive doses of medication to prevent cancer recurrence.

Interestingly, this issue of the potency and stability of levothyroxine goes back more than a decade. In 1997, the FDA announced that due to long-standing stability and potency problems, levothyroxine products were being classified as "new drugs" and would need to go through the "new drug application" (NDA) process. Until then, levothyroxine, which was introduced in the 1950s, was regulated by the FDA, but had never gone through a formal "approval" process, having been grandfathered in with the natural thyroid drugs in use since the early 1900s. You can read more about the new drug approval process for levothyroxine in an article here at the About.com Thyroid site.
Implications and Recommendations for Patients

Although all approved levothyroxine sodium products fall within the current potency specification of 90 percent to 110 percent, the stability data showed that some products rapidly degrade over their labeled shelf life. Some strengths or package types, such as blister packs, degrade more rapidly than others, resulting in varying expiration dates within product lines. In addition, there is variability in expiration dating periods between products from different manufacturers. Some levothyroxine sodium tablets remain very stable, losing less than 5 percent of labeled potency within 24 months, while other products lost approximately 10 percent of labeled potency in 9 months.

The FDA requested and received stability data from manufacturers of all the approved, marketed levothyroxine sodium drug products manufactured between July 2003 and June 2005, and examined the stability profile of each drug.

The data revealed a trend toward a loss of potency, with some preparations showing potency approaching 90 percent of labeled potency by the expiration date. Although all approved levothyroxine sodium products fall within the current potency specification of 90 percent to 110 percent, the stability data showed that some products rapidly degrade over their labeled shelf life. Some strengths or package types, such as blister packs, degrade more rapidly than others, resulting in varying expiration dates within product lines. In addition, there is variability in expiration dating periods between products from different manufacturers. Some levothyroxine sodium tablets remain very stable, losing less than 5 percent of labeled potency within 24 months, while other products lost approximately 10 percent of labeled potency in 9 months. By tightening the potency specification and limiting the amount that products can degrade throughout their shelf life, FDA is reducing the variability in the stability profiles between products that could have clinical consequences in achieving target thyroid levels, especially for the most vulnerable patients, such as those with thyroid cancer.

9. What does this mean for the approved products?

Some products may meet the new potency specification throughout their current shelf life and require no change. The expiration dating period of some strengths and/or package presentations for some products may need to be shortened. For other products, manufacturers may need to alter manufacturing processes or product formulation to improve their stability.

6. Why is there a 2-year time period for products to meet the revised specifications?

FDA has requested that manufacturers comply with the revised potency specification within 2 years. Because of medical necessity, it is important to have an adequate supply of this drug product. When FDA declared levothyroxine sodium a new drug in 1997, manufacturers were given 3 (later extended to 4) years to submit applications and obtain FDA approval of their respective products. Although the new potency specification represents product improvement, the quality and consistency of the currently approved levothyroxine sodium products reflect significant improvement compared to those that were historically available before 1997. It is important to note that some manufacturers have already demonstrated that their marketed levothyroxine sodium products can meet the revised specifications, and others have made assurances that they can meet a revised potency specification with formulation and/or manufacturing changes. The 2-year time period for products to meet the revised specifications will enable this transition without adversely affecting public health. 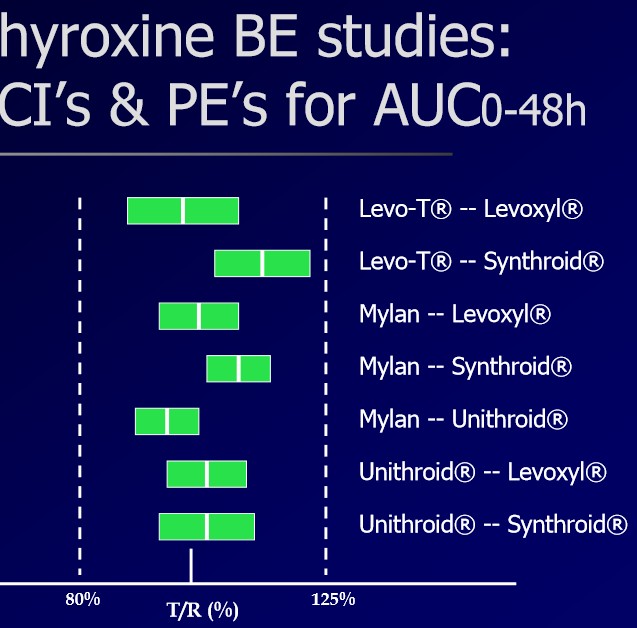